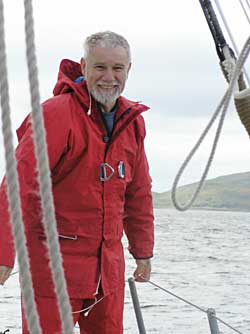 George, shown here sailing with friends in Scotland, left grammar school in 1962, aged 18, with A-levels in History, Mathematics and French, and one year into a City & Guilds Diploma in Boatbuilding and Naval Architecture, which he completed in 1963 at the North-East Essex School of Art & Technology.

George's first major project was the conversion of the old 7.5 acre (3 Ha) Tide Mill pool into a new yacht harbour. Work started in February 1963 – the coldest winter in England since 1740! The big freeze-up actually enabled the construction of the new yacht harbour because the draglines could track around on the ice – looking back it is doubtful if this could have been accomplished in a normal winter. The project took two years to complete, by which time Whisstocks had the very first marina in the UK, with berths for up to 200 yachts.

During this time George fitted in an intensive Marine Engineering apprenticeship with Tucker Brown Engineering of Brightlingsea, Essex, travelling back and forth at weekends and some week-nights in his 1938 Austin 10 Cabriolet saloon.

With the Tide Mill Yacht Harbour completed George gained practical experience in the yard, in all aspects of classical carvel boatbuilding, servicing and repair, plus a stint at a local Naval Architect's office. In 1972, the yard took an order for what turned out to be the last classical carvel yacht constructed there and, facing the onslaught of GRP production yachts, George spent several months studying wood-epoxy system construction on the New England coast of the USA and visited the Gougeon Brothers, originators of the WEST™ system.

George returned to the UK convinced that the future of wooden boatbuilding lay with wood epoxy and more specifically the WEST™ system. During the 1970's the yard built several custom cold moulded yachts, perhaps the loveliest of which is Yard No. 500 "Gemervescence", designed by the notable French architect Sylvesre Langevin. In 1978 the yard commissioned Langevin to design the 30' WEST™ system kit boat project "Naja" and over the next few years some 40 of these remarkable kit boats were produced. George wrote the step-by-step building instructions for these boats, his first foray into this type of writing, which continues today with the building instructions for his own designs.

in 1979 the yard took its first order fo a yacht constructed in aluminium alloy – for round-the-world yachtsman David Cowper. The hull for this yacht was built by the famous Huisman yard in The Netherlands. Impressed by aluminium alloy construction and its suitability for high quality custom yacht building – the yard's speciality – George decided to introduce this form of construction into the yard alongside wood-epoxy construction.

Early aluminium hulls were built to order near St. Nazaire in France, but by 1982 the yard had developed the capability of building its own hulls as well as completing them. Yachts in this period included the 35' Selestra class and ranged up to custom yachts of 60'+. Whisstocks became one of two major yards in the UK with the expertise to build quality yachts in aluminium alloy and construction in this material had largely eclipsed wood-epoxy in the yard's production.

By 1982 George had developed a fully operational design department at first using Apple II computers for design calculations, though still drawing in ink on traditional drawing boards and printing by the Diazo process. All aspects of the yachts in production were drawn so that interior furniture and other items could be manufactured at the same time, or even earlier, than the hull. Aluminium components (such as the frame and backbone parts) were often drawn out full size on Mylar film to be pre-cut by the aluminium suppliers (who also bought the clean 'scrap' back at better prices, delivering only the cut parts).

In 1983 needing re-capitalization, the family decided to sell a major share in the boatyard and the yacht harbour to an investor, Barry Lester. This was accomplished in August 1983 and the yard entered on a new program of 60' luxury aluminium cruising sailboats, the first of which was "Blest" launched in 1984. At the same time (1983) George started his own design practice, which by agreement, only designed for 'home builders', while he continued to develop and manage the boatyard's design office. Unfortunately, in late 1984, Barry Lester failed to continue with his investment in the boatyard and, with a program of ten 60' yachts under way, the yard became insolvent and closed. Barry Lester later did the much same thing with Brooke Yachts of Lowestoft, ironically the yard where Claude Whisstock, George's father, worked until the General Strike of 1926.

A group of investors George among them bought the boatyard premises from the receiver and re-started the business. Apart from Barry Lester's program, all other yachts in build at the time were completed for the remaining amounts of their contracts. The 60's were, sadly, sawn up and sold for scrap, as buyers couldn't be found for them.

As Design Director of the new company, George developed the design office, equipping it with Mac computers and in 1985 and changing wholly over to Computer Aided Design. During the 80's some great aluminium alloy cruising yachts were built at the yard, both to outside designs (Silvestre Langevin, Steve Dalzell, Laurent Giles among the designers) and to in-house designs. Chief among the in-house designs was a range of 65' charter yachts - which continue to this day in our design portfolio as Design No. 044. The largest vessel the yard built during this time was the 100' luxury motor yacht, "Gitala" – probably the largest vessel ever launched on the Deben and the subject of much interest locally – about 1,000 people came to watch her launching.

Wanting to pursue his own design practice George left the direct employ of the company in late 1987, though he continued to be responsible for the company's design office as a consultant until early 1990. From 2000 George and his wife Cathy developed a more inclusive design business, to include website design and coding, book publishing, CD production and architectural planning and remodeling. The office is still equipped with the latest Mac computers.

On a personal note George has been a vegetarian or a vegan for much of his life and now rarely eats anything but plant foods. He is also a firm humanist. To him the vegan way of life and humanism are the moral compass of a developed humankind, celebrating a positive, vibrant and meaningful life on this wonderful earth. Favourite leisure activities are woodwork, listening to classical and baroque music, reading New Scientist, and attempting to complete cryptic crossword puzzles!