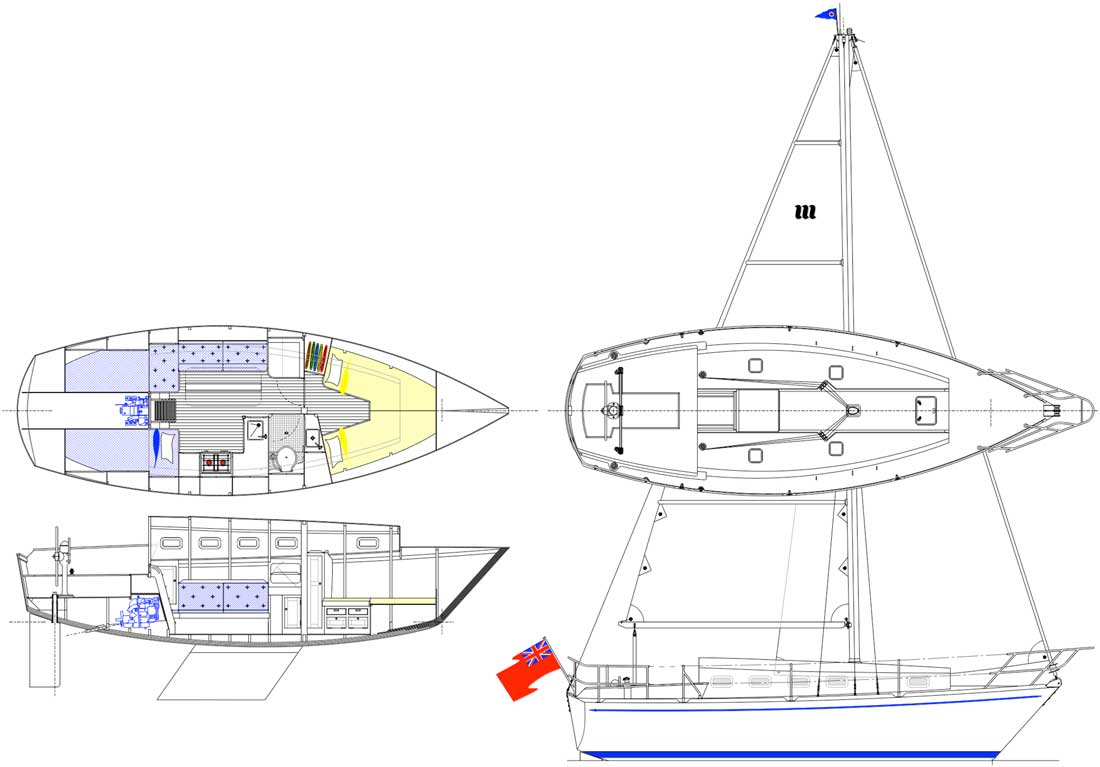 Close Window
Design No. 056 – Sapphire 27 – A Relaxed Sail off the Atlantic Coast of Spain 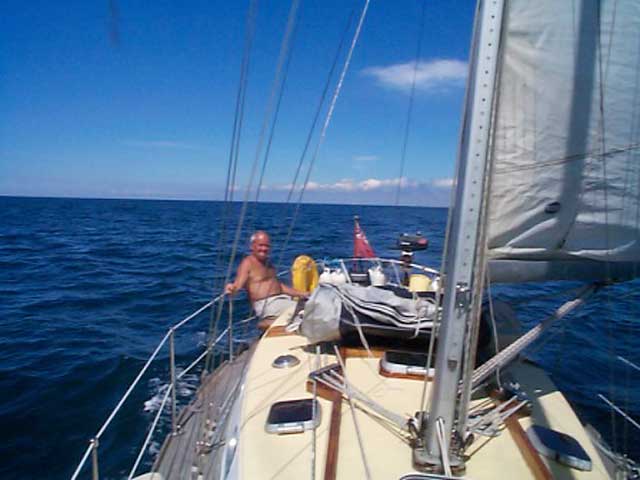 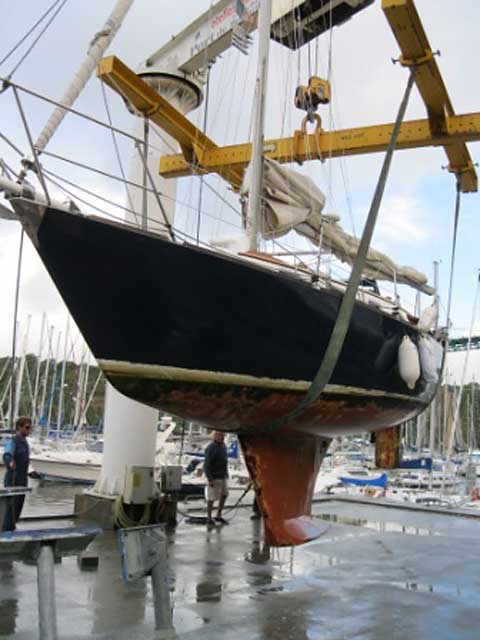 Close Window
Design No. 056 – Sapphire 27 – Antifouled and Ready to Re-launch 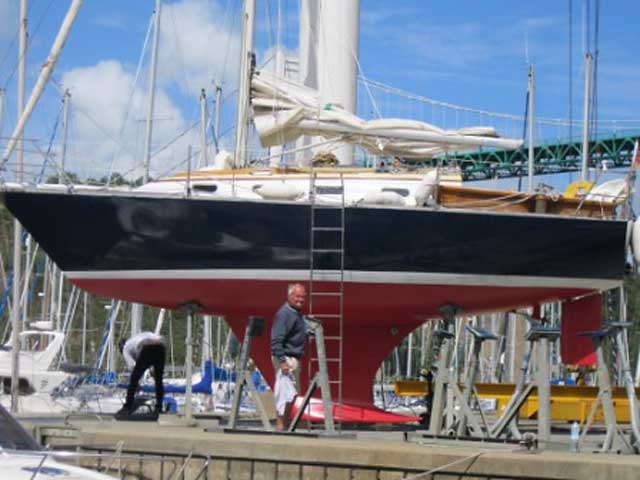 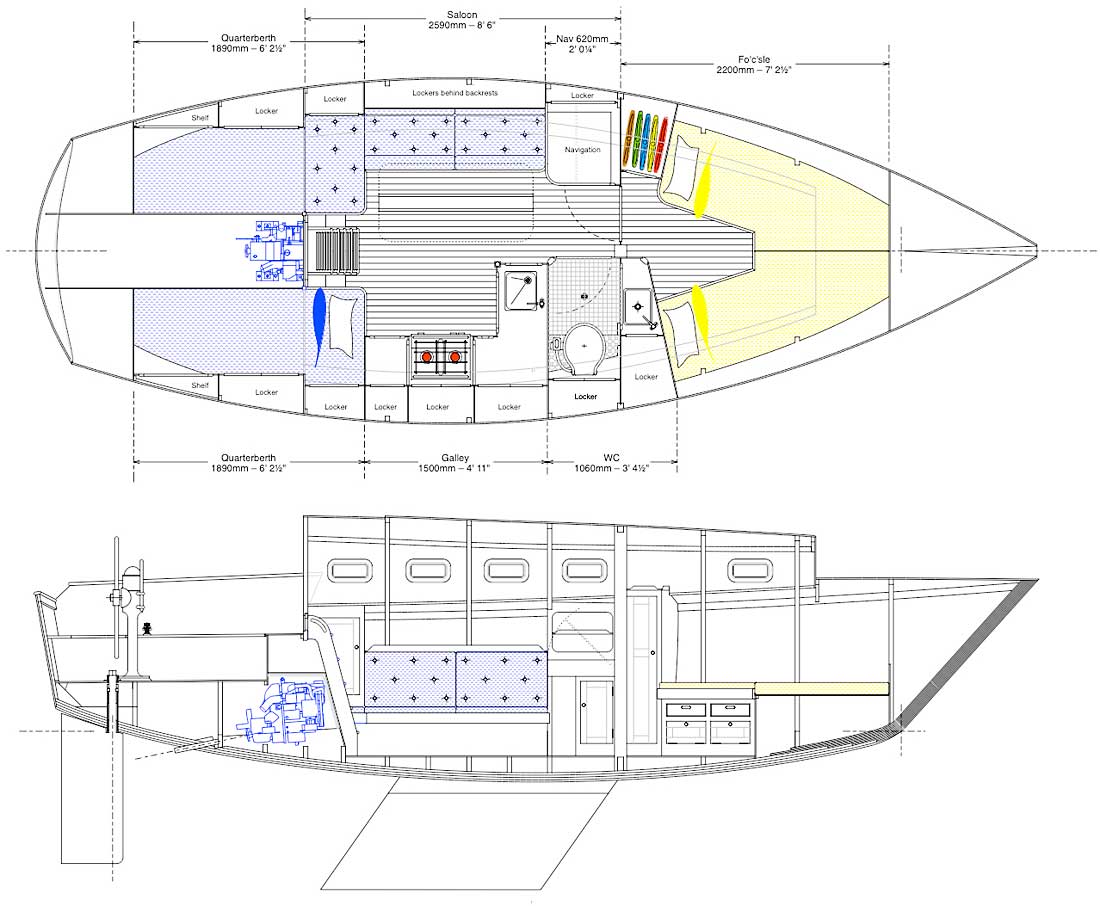 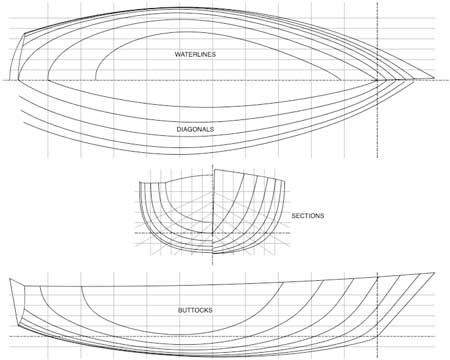 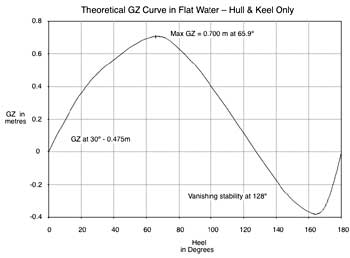 The GZ curve is developed using the calculated centre of gravity of the boat on the dwl, which is the figure that comes out of the preliminary weight estimate. It assumes a flush-decked hull, which gives a reasonable approximation of the stability once the deck edge becomes immersed. The area under the inverted curve gives some indication of capsized stability – for this design it is relatively small, indicating that she should right herself quite quickly. The inversion angle is about 128º.

Though this is a theoretical GZ curve in flat water, it is useful for assessing the basic dynamic stability of the boat. In reality, under seaway conditions, dynamic stability may be greater or smaller than indicated, depending largely on the shape of the lee bow wave. if there is a “hole” in the wave amidships as when the boat is travelling near waterline speed, this will lessen stability. If there is a crest amidships, then stability will tend to be greater. And the action of the waves themselves will also affect stability.

The loads in the spars and rig are calculated using the GZ at 30º. Though the GZ continues to rise as the boat heels, the sails will be spilling wind at angles beyond 30º and so it will not just be the sails and spars that are causing the boat to heel. There are also built in safety factors that we apply when calculating the spar and rig sizes to allow for knockdown situations.

A note about Displacement: Displacement is the weight of water the boat displaces at any given flotation waterline. It is therefore the same as the all-up weight of the boat floating on that waterline. It is often quoted with the boat floating at the Datum Waterline (DWL) or a specific Load Waterline (LWL) – but obviously varies depending on the amount of gear and personnel aboard. 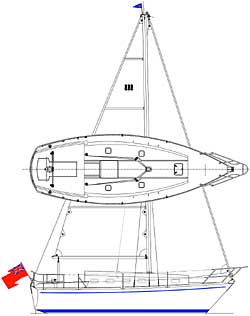 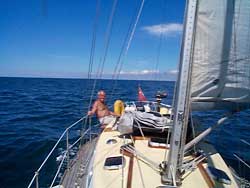 The first Sapphire 27, pictured here was designed and built in 1993/94 by a non-professional team, supervised by an experienced boatbuilder; she was exhibited at the Southampton International Boatshow in 1994. The boat now has many thousands of sea-miles under her keel and has proved herself in all aspects of sailing, whether it be club racing, family cruising or extended voyaging.

In 2016, we decided offer this design as downloadable plans, with a few modifications from the original to make the boat rather more cruising oriented and easier to build. These include some minor changes to the interior layout, wheel steering (tiller steering is still an option), a more economical cast iron ballast keel, and a straightforward masthead rig, with the main sheeted clear of the forward part of the cockpit. Sapphire 27's have subsequently started to build in Europe and Australia.

The standard construction is cold-moulded wood epoxy on laminated frames; CNC cut ply sandwich frames are an alternative. The components for ply sandwich frames (three layers) can be marked out and cut by hand, but that is a very tedious process – the parts really are best CNC cut. The boat can also be built with a ply/epoxy lapstrake hull skin (the planks for which can be CNC cut if wished), or a strip-planked hull with an external bi-axial glass cloth sheathing.

The original Saphire 27 is cold-moulded construction on single-layer 12mm ply frames. While this is simple, and the ply for the frames can be CNC cut, or marked out and cut by hand, there are a couple of disadvantages. Firstly, to be economical of material and space (because they are deeper), the frames tend to become somewhat intimately tied up with, and control, the interior layout – whereas with laminated frames and ply sandwich frames, the interior layout can be largely independent and easily rearranged to suit individual builders. And secondly, they are slightly more difficult to set up and fasten the hull skin to (because they are only 12mm thick). However, once filleted to the hull skin, they are strong and stable – and, as already mentioned, are mostly incorporated as part of the interior furniture. 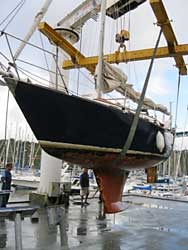 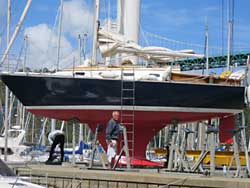 As mentioned above, the standard keel is a cast iron fin. It is strong and easy to engineer and gives excellent performance and stability. These photos show the original Sapphire 27 keel which consisted of a stainless steel keel envelope (which doubled as a fuel tank) with a lead bulb – highly effective but expensive and complicated!

Other keel possibilities, which can also be attractive if there are no foundries capable of casting yacht keels economically, include a longer shallower lead keel with an integral centreboard (which would be wholly contained beneath the cabin sole); and a keel of similar proportions to the standard cast iron keel, but with a deeper deadwood component and a lead ballast keel at the bottom.

The accommodation as drawn is arranged as follows:

A private fo'c'sle with twin V-berths. There is a hanging locker to port and drawers and lockers beneath the bunks; there can also be stowage shelves or nets above the bunks if wished. The V-berths can be converted to a double with an infill piece. There is good standing headroom (about 1825mm - 5' 11¾").

The WC and shower is to starboard, again with good headroom (about 1850mm – 6' 1"). The drawings shows a standard marine toilet, which can be connected to a waste tank – but most types of marine toilet can be accommodated. There are plenty of lockers and a nice sink unit.

Opposite the WC compartment, to port, there is a small navigation area and table wit a lift-up lid to chart storage; there is a cupboard beneath the table and lockers outboard of it.

The saloon settee runs aft from the chart table and also utilizes the forward end of the port quarterberth. There are lockers beneath the seats and outboard of the backrests. A generous drop-leaf table gives plenty of dining space and, with the leaves down, provides a narrow fiddled table. The settee can be configured as a fifth berth if wished, by omitting the cupboard under the chart table.

The galley to starboard is L-shaped with generous locker space and counter top; the gimballed cooker shown is a two-burner, grill and oven model.

The accommodation is completed with a full-size quarterberth both to port and starboard. There are lockers and shelves outboard of the berths.

If larger cockpit lockers are required, then the port quarterberth could be omitted and perhaps an oilskin locker added immediately aft of the settee. In this scenario, the L-shaped settee is of sufficient length for a berth, without sacrificing the cupboard under the chart table. And, of course there are numerous other interior layout options that can be explored to suit personal requirements and preferences.

The engine shown on the drawings is a two-cylinder Volvo D1-20 conventionally arranged with a shaft drive. This engine is also available with a sail drive, which does have some installation advantages. Several other engines are also suitable. The fuel tank is astern of the engine under the cockpit sole.

The rig has deliberately been kept very simple with a straightforward fully battened, slab-reefing main and a masthead roller-furling genoa, which we feel gives the best all-round performance and convenience for cruising. This allows the simplicity and security of a standing backstay. Control lines and halyards are brought aft to the cockpit. A cutter rig would also work well on this boat.

One could consider more racing oriented rigs – say a square-topped main and a ⅞ foretriangle – if wished. The original Design 056 is ⅞ rigged – with a carbon-fibre retractable bowsprit for the spinnaker and she is a very fast boat!

Click here to look at the free study plans and a list of the plans and instructions that are currently available. Two of these boats, with the shallower keel and centreboard are in build at the moment.

100+ plans and 7 or more books of instructions will make up the portfolio for this design. The plans will contain all the information necessary to build and complete the boat, make all the components (like bow and stern pulpit, stanchion bases etc.), furniture units and parts, together with the necessary systems (wire-by-wire electrical system, pipe-by-pipe plumbing system etc.), equipment and fittings. The instructions lead you through the build step by step and also deal with launching, rigging and sail trials.